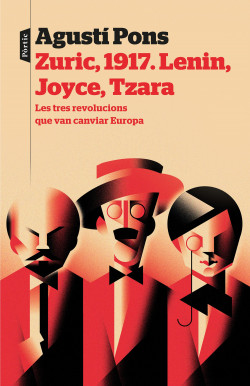 Lenin, Joyce, and Tzara, together in Zurich 100 years ago, were the figureheads of the three revolutions of the XX century: political, literary, and artistic.

In 1917, three key figures of the XX century coincided in Zurich: Lenin, Joyce, and Tzara. Each one will lead a revolution that changed the character and the shape of Europe: Lenin’s communist revolution, Joyce’s literary one, and Tristan Tzara’s artistic one, which gave rise to Dadaism and the famed Cabaret Voltaire. Strangely, none of them was Swiss, yet the three of them were in that country in the same year, which some historians designate as the true beginning of the XX century.

Agustí Pons, one of Spain’s most important biographers, has woven together the three stories with a vision of Europe in the midst of WWI and the outbreak of the Soviet Revolution.

A well-documented, generous account that pays close attention to the thin line between utopia and criminality.