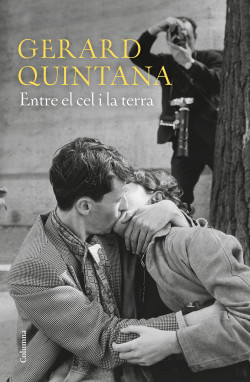 Between heaven and earth

Barcelona, 1952. Pachi Saura moved to the city more than a year ago to study at the School of Fine Arts. Once in a modest dwelling close to la Plaça Reial, he tries to build the life he has dreamed of far away from the dictates of his family. The first few months, he shares the joy of life and music, one of his great passions, with some young people in the neighborhood who pose for him in exchange for a little money. Through his eyes, the surrounding misery yields up little treasures in his almost obsessive quest for beauty. But two women will mark his destiny forever: Neus, thankfully married, whom Pachi rescues from the charge of the Civil Guard during the General Protest on March 12, 1951; and Àngels, daughter of an editor exiled in France, intelligent, with an androgynous beauty that makes him feel an attraction even deeper than the pull between two sexes.

A deep secret unites them, but many years have to pass before the truth will find them and they will understand how to react.

Between Heaven and Earth is a novel that leaves readers breathless, a grandiose literary experiment that asks many questions: Does happiness depend on the quality of memories or the strength to bear them? Is art a way of concentrating on beauty in the face of horror, or is it a tool to transform reality? And finally, if love is everything, why does it need limits?