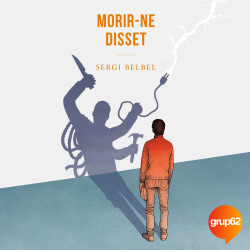 The confession of someone who takes justice into their own hands.

Ernest Calvo’s parents moved from southern Spain to Catalonia and he was born and grew up in an industrial city in the Vallès Occidental, where he totally assimilated. As he recounts, with nostalgia and humor, his childhood and teenage years – during which he discovers a culture and a language that both fascinates and unsettles him – he confesses to a series of murders committed in the period between the coup d'état in February 1981 and the '92 Barcelona Olympic Games. Through his relationship with his best friend, the son of a humble, honest working-class Catalan family, Ernest confronts the contradictions of a society in the process of change, a society in search of itself—much like he himself is—and that sees its survival threatened. A hilarious confessional story that skillfully and audaciously holds a mirror up to Catalan society.

Winner of the Sant Jordi Prize.

Sergi Belbel (Terrassa, 1963) is a writer, translator, and theater director. He has directed productions of classic and contemporary authors and written scripts for film and television. Among his many awards are the  Ignasi Iglésias (1987), the National Prize for Catalan Literature (1993-95), the Born Prize (1995), the National Prize for Dramatic Literature from the Ministry of Culture (1996), the Molière Prize for best comedic work for Après la pluie (1999), the Catalan National Theater Prize (2000), the Max Prize for international projection (2002), the City of Barcelona Award (2003) and several Butaca Awards.